It's been awhile since my last card activity. Adding a baby, now toddler to the mix can have that effect. I'm sure a good many of you can attest.

I've followed the card blogs a bit, but seeing Stadium Club on the shelves at my local target finally led me to spend my first dollars on cardboard in 2018. Doesn't get much better in this hobby than opening up a pack and finding your favorite player. 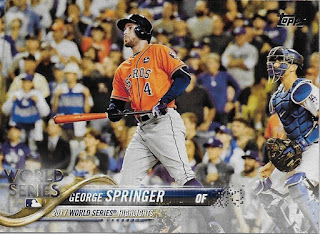 You've seen plenty of base cards by this point, so here's one of the highlights of the pack for me. A World Series highlight, in fact. This is one of Springer's five home runs in the 2017 World Series. 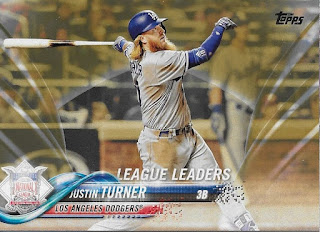 And the interests from the pack. I guess Machado will make himself into a legend on another team here shortly. To all the Orioles fans out there, I feel for you and hope that the players coming back end up making a difference down the road.

The D-Backs just took two of three from the Braves before the All-Star break and Goldschmidt is a big part of the success they are seeing. With all the player movement these days, I appreciate seeing a guy stay with a team for the long term.

I would like the Superstar Sensations insert set better if the colors matched the team colors rather than seeing purple on every card.

Since Stadium Club is always my favorite set each year, I'll have to devote an entire post to that pack. Hopefully it's not another 11 months before the next post!

I'll be watching the All-Star game tonight. Mookie, Freddie Freeman, and Nick Markakis in his first AS game and starting - a lot to get excited about!
Posted by cardstacks at 9:00 PM