Since my son was born in late 2016, my posting on this blog, and card collecting altogether, has been minimal. He's now getting to the age where he likes 'stuff'. What kind of stuff does not matter much. He likes rocks from the yard the same as a bouncy ball, the same as his dinosaurs, the same as... baseball cards. He likes to port his 'stuff' around in a backpack or in the basket on the back of his bicycle. So when we went to the store the other day, I was able to get him excited about opening a pack of baseball cards, just as if I was offering him a sucker or chocolate milk.

I chose a 2019 set that is generally one of my favorites each year, but also one that had more than a handful of cards to make the fun last a little longer. To scratch my own pack busting itch, we opened a 20 card pack of 2019 Topps Heritage together, the first pack of cards I'd opened in over a year.

These were the cards that stuck out to me in this 20 card pack. The Carpenter was the lone SP in the pack. Nelson Cruz and the Twins just finished up a series against the Braves, and he's still slugging away at age 38. 32 Home runs in 86 games in 2019, can that be right?? And J.P. Crawford was the other player of note for me in this pack. Last I checked, he was on the Phillies, but looks like the former 1st round pick was traded in December to the Mariners. Still just 24 years old. 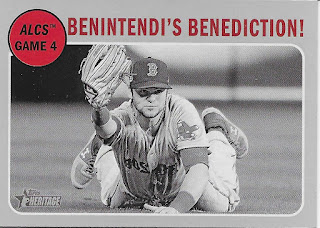 And this was the highlight of the pack for me. Anytime a former member of the Greenville Drive over the past few years shows up on a card, it's fun to see, especially when it's highlights from big playoff games.

And now that I know I can use a pack of baseball cards as a reward, maybe this blog will become more active again, who knows.

Here's the full contents of the pack:

Posted by cardstacks at 9:00 PM