You Be the Judge

Well I opened my first pack of 2019 a few weeks back, and that led to more packs being purchased, of course. In what I hope will be an ongoing tradition, my two year old son helped me open two 3-packs of Topps Chrome, with some Pink Refractors included with each.

My favorite card of the bunch is the our first Braves card of 2019. I give you, Chrome Nick Markakis. 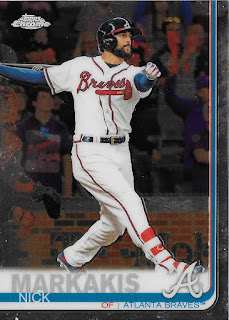 Base Chrome cards never scan particularly well, but it's the first Braves card I've opened in over a year, what can you do? I compare Nick Markakis to Topps Chrome in that you pretty much know what you're getting. With Markakis you're not going to get a ton of power, but you're going to get good at-bats lots of doubles and solid above-average defense. When you open a pack of Topps Chrome, you know you're getting shiny cards that you've probably seen before, and chances are solid of getting an insert or refractor, and a rookie card.

These packs fulfilled that expectation perfectly. 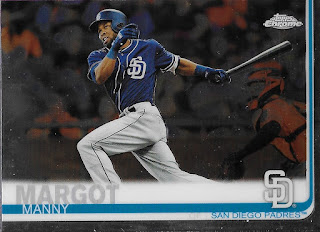 Here's the other base card that stood out to me from these packs. I first watched Manny Margot (He'll always be Manuel to me), play in Class A ball in Greenville, and he stood out as one of the best on the field each time. 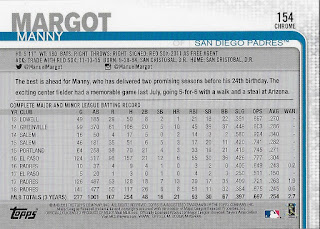 I appreciate Topps Chrome (and Topps) showing Minor league and Major league stats for the younger players. This one shows stats from Margot's ascent up the minor league ladder to the Padres, and his switch from the Red Sox system to the Padres (Portland to El Paso). Over 40 stolen bases between Greenville and Salem back in 2014! 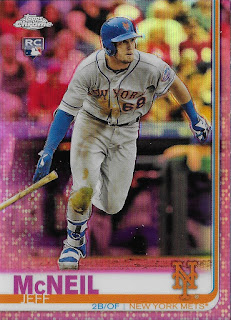 The best of the Pink refractors had to be Jeff McNeil, one of the Mets star rookies. While not the most valuable card of the two rookies, McNeil is having a fine season and a big reason that the Mets still have a shot at the playoffs. This was the first of many cards we pulled of rival and 'hated' (Yankees) teams. 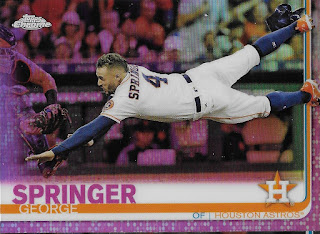 Springer I seem to pull a card of in just about every break. Francisco Lindor is another. Could do worse, I guess, and the play at the plate shot here is fun. 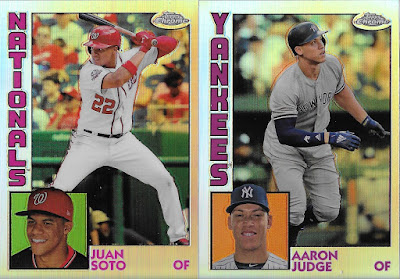 Two 1984 Topps inserts, neither fit into my collection and fit the NL East or Yankees criteria. The Nationals are trying to catch up to the Braves in the NL East, but are looking like a sure thing to make the playoffs and are one of the hottest teams in baseball. I also opened a base card of Soto.

And this is the first Judge insert I've seen and while I won't object to pulling his cards, they don't fit into my collection either. The inserts definitely scan much better than the base cards. 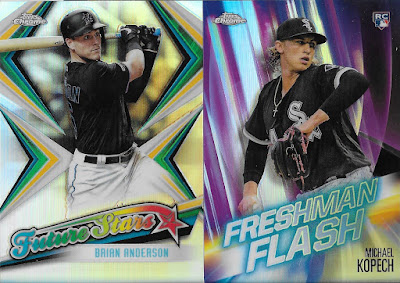 Another NL East player in Brian Anderson. Down the road the Marlins may be dangerous but it seems like it might be awhile. Also opened a Trevor Richards.

Kopech can throw the heat with the best of them. Another former member of the Greenville Drive who went to the White Sox in the Chris Sale trade. 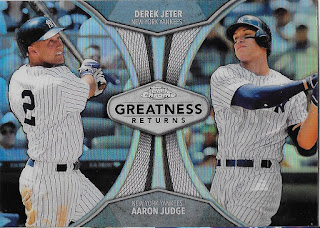 Greatness Returns in Jeter/Judge form in my packs of Topps Chrome, and while I'd rather have it return in the form of a Braves great and current star, I know I'll have plenty of takers for this insert. The faces of the Yankees franchise, as the back of the card describes, won rookie of the year 21 years apart.

It looks like both Braves in this insert set are paired up with Mike Trout. GRE-8 features Hank Aaron and Trout, and GRE-10 features Ronald Acuna and Trout. Why not just pair up Aaron and Acuna, or at least have it as another card in the set?

Here's the full contents of the six chrome packs plus the pink refractors:

So you be the judge, which card wins from this set of packs? What are the odds of hitting two inserts of Judge out of 6 packs.
Posted by cardstacks at 9:56 PM