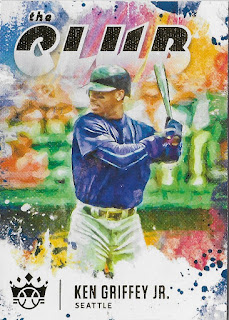 Diamond Kings is a product that I always enjoy seeing but don't usually open much of. This year I saw a blaster on the Target app and decided I would pull the trigger on it. I looked at the insert checklists and the colors on some of these were enough to get me to purchase. I generally like the base set for the basketball Court Kings product, and I think if we had logos on these then Diamond Kings would be one of my favorite products each year. Without them it's probably middle of the pack.
I didn't realize until writing this post that I pulled 5 SPs, cards with a number 101 or higher. I received:
138 Lewin Diaz, 143 David Peterson, 158 Kyle Lewis, 163 Matt Chapman, 168 Max Scherzer

Highlights of the base cards for me, and I think they show the variety in this product. Start with Sisler, born in 1893 and the MVP in 1922 for the St. Louis Browns, and next to him is Bobby Dalbec, a rookie for the Red Sox born over a century later in 1995.

Then we have an Artist Proof of Joe Jackson, born in 1889, from Pickens County, SC. The Shoeless Joe Jackson Museum is across the street from Fluor Field, home of the Greenville Drive. Cool to pull one of his cards out of a pack, and a parallel, even better.

One of the perks, based on the outside of the box, was a bordered parallel card. I opened George Brett as you can see.
So many of these rookies I am pulling I know nothing about, and Carlson is one of them. And sometimes that happens even with the highest rated prospects. He was rated a consensus top 20 prospect in baseball heading into the 2021 season. But luckily this blog post gives me a reason to find out more. A first round pick in 2016, Carlson is having a solid season for the Cardinals.
First Cristian Pache going into my collection. I realize he's a defense first player, but I hope his bat gets going too.

I know these guys, no doubt. First Vlad card I've pulled in awhile, and no complaints there. The Legacy Lithographs set is farther down on my insert rankings, if I had them, though.
I like the look of the Gallery of Stars a bit better, especially the colors in the Bryce Harper, although I would have preferred a different player, personally. Luckily I pulled another, of Roger Maris. No complaints on that one. 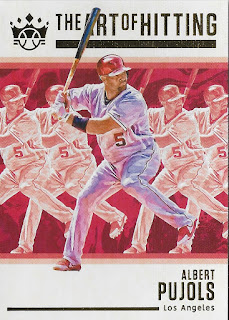 The Art of Hitting is a sharp insert set. Keeping it simple and it works. Pulling an insert of Pujols made me go and search to see how much his 2001 Topps Traded is going for. Seems like one can be had for under $100, and possibly a good bit less, and a Chrome version for about twice the price. For an all-time great, that doesn't seem too bad compared to all the other craziness going on in the hobby right now. 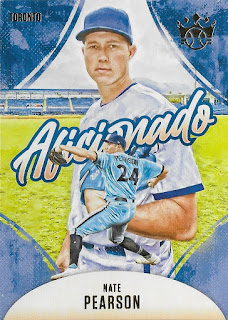 I’ve seen Pearson show up in multiple pack breaks recently, and though not one of the more hyped rookies, he’s a top prospect for the Blue Jays and a former first round pick. I do like the design on this one with the field and stadium in the background. 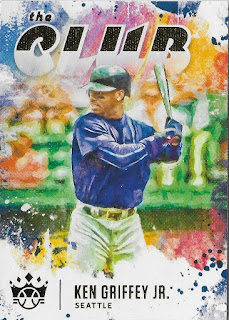 This is simply a beautiful card. Anyone have the Cal Ripken Jr. or Greg Maddux from this set they would swap? This set and the one following have to be highlights from Diamond Kings this year. 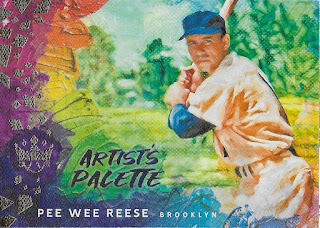 Artist's Palette is my other favorite from this blaster break. What's interesting is that Reese is the only retired player in the 15 card set. The others are all fairly young stars or rookies. This set is made up of all horizontal cards.
The more I flip through the cards from this break, the more I like this product. The inserts are sharp and the base set isn't so bad either. Seems like the issue a lot of folks have besides the lack of logos is use of the same photos for retired players from year to year, which is valid. If you look at it as a standalone product, it really is a nice design.
Posted by cardstacks at 7:00 PM