Back in 2017 I wrote a series of posts when I started following hockey and picked up my first packs of hockey cards, and some bloggers were generous enough to send me a 'starter pack' of Predators cards to get my collection going. Well, towards the end of 2017 I really stepped back from cards entirely. But what I've learned about this hobby is that long-term, it has staying power for me, and it always comes back around. The cards will always be there, the people in the hobby will always be there, and in 2022 now more than ever, sports card content is everywhere.

And so my first foray into hockey cards in five years is a blaster box of 2021-22 Upper Deck MVP. The blaster has 15 packs, a great product if your idea of fun is busting a lot of packs. The base cards have a mint color as part of the design, with the image looking like ice is shooting up form the players skating. It's a cool effect. Each card from the base set has an 'Ice Battles' parallel, and the short prints, including rookies, are blue.

My chosen team was the Predators, and I've stuck with that, although I've followed them more loosely than I would like. With young kids, it's been hard to find time to watch a full game, to be honest. Now that my oldest is five and he's showing interest in several sports, including hockey, it's become much easier to at least catch portions of a game.
These three are familiar names for me, Fiala being a former Predator.

Here's an example of one of the rookie cards from the set. Denisenko's only appeared in one Panthers game, but is getting plenty of time with the Charlotte Checkers of the AHL. The Zac Jones is a rookie short print Ice Battles parallel.
Zac Jones I included because he's originally from Richmond, VA, which is where I grew up. I figured that was rare for an NHL player to be from Virginia, and even less likely to be from Richmond, and sure enough, with his NHL debut in April last year, Jones is the first player from Richmond to play in the NHL. So there you go, maybe a reason to start a side player collection.
Meier recently scored 5 goals in one game, a feat I've definitely never seen before in my brief time as a hockey fan. And this happened in a game I happened to be watching on replay with my son. He's a fan of the Sharks logo and the jerseys, as you can imagine. The Sharks are probably his top hockey team right now. That could change any day, but we've enjoyed watching the Sharks, and that 5 goal performance was quite a treat. I've always been an insert guy, going back to collecting basketball cards in the 90s in my childhood. What I wasn't expecting out of this MVP blaster were inserts that make me want to look at the checklist and see who else I can grab. The cracked ice effect, especially coming out of cheap packs like this, are something that would have hooked me as a child, and I guess I'm not much different today. 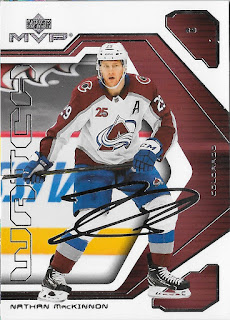 This 20th Anniversary set reminds me of an insert that would have come out of MVP products in the late 90s/early 2000s. Can't argue with a MacKinnon card, either, a former number one overall pick. I'd like to pick up the Josi from this set. I'd expect the gold parallel of a Pred would look nice! 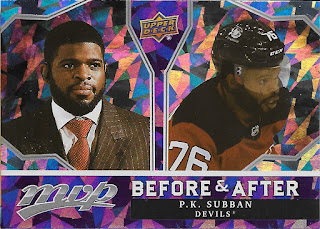 P.K. Subban was a favorite of mine, and I'm sure many others, from his time on the Predators. The Predators traded him to the Devils in 2019, and even though he's not at an All-Star level anymore, he's still popular enough to be included in insert sets like these. The before picture shows him wearing a red tie to the CMT Music Awards in 2018, before his time with the Devils. Glad I pulled a player I appreciate from this set.
Posted by cardstacks at 1:00 PM