Collecting Upper Deck is a Trip Down Memory Lane

I picked up two cards off eBay over the last few weeks, both cards from Upper Deck hockey products. I'm waiting on a fairly large COMC shipment, but there are so many cards in the queue ahead of mine that I doubt it'll actually ship by the listed ship date. But between the eBay and COMC adds it's clear to me that what I value in today's collecting world is nostalgia. I enjoy finding cards with retro designs, especially designs that I remember from my childhood collecting.

Collecting hockey is exciting for me on three fronts. It's exciting because it's something my son is getting into right now. He's learning to ice skate, because to play hockey he has to know how to skate. We live in South Carolina, so it's no hockey hotbed here, but you wouldn't know it spending a day in our house.

It's exciting because it's something almost completely new for me. I've collected a lot of basketball cards and am still pretty active on that front (see HoopsHobby.com), I pick up baseball cards, and I'm sure I'll be active there once the season starts, whenever that might be, but going through a full season of hockey products is new.

Lastly, I get to open packs of Upper Deck cards again, and with Upper Deck I get those retro designs, some of which were used in basketball as well. 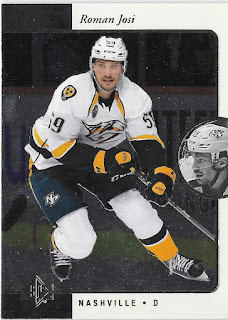 The first card I picked up recently meets number three. This is a 1995-96 SP insert from 2015-16 SP Authentic of the captain of the Predators, Roman Josi. I started on a hunt for retro inserts after seeing UD3 and some others in 2020-21 Upper Deck Extended, and this was one I knew I had to pick up. While I didn't necessarily open any packs of 1995-96 SP basketball, I do have several Pacers (my NBA team of choice) in my collection. I look at this card and I'm 9 years old again, trading with my best friend from down the street. 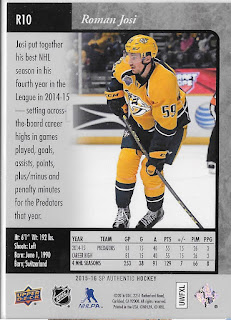 Love the back too, even though I don't think it's true to the original as far as finish. But the design is close enough for me.

The next one is not a retro design, but a parallel set that's been around for a long time, but one I honestly don't know if I own any of in any sport to this point. 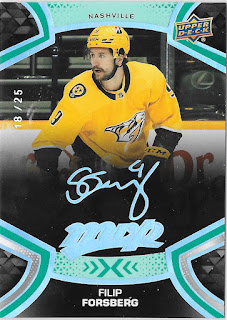 I don't have the base Forsberg, or any other versions from this year's MVP, but I now have a Super Script parallel numbered out of 25. I have plenty of Silver Script and even a few Gold from basketball sets in the late 90s and early 2000s, but this is my first Super Script.
Really hoping the Predators find a way to get an extension done with Forsberg that makes sense for him and the team, but what I'm reading is that it may limit the flexibility to make moves around him. Tough spot for both sides.
I just broke a box of 2021-22 O-Pee-Chee with my son, so I'll have a recap of that coming soon, and also share some of the cards a fellow blogger sent for my 5 year old son. The blogging community is a generous group, that's for sure.
Enjoy ripping your Series 1 packs if you've got 'em!
Posted by cardstacks at 9:36 PM